Pepián de Pollo is a Guatemalan dish that I have always been fond of, in fact, it might be my favorite Guatemalan dish to date.  Cooking Pepián is similar to making a Mexican Mole, except, instead of a cocoa base, the sauce is built up around pepitas or pumpkin seeds.  Pepián blends together a combination of bold flavors into a complex sauce which is the basis for the dish.  Its stew like consistency is perfect for the cooler weather, and its use of pumpkin seeds lends to its seasonal charm.

In a large stock pot boil and then simmer until cooked:

Once the cooked chicken and vegetables have cooled a little, set a colander on top of a large bowl and pour the ingredients out preserving the chicken broth while removing the other ingredients from the liquid.

Prepare the ingredients for the Pepián sauce:

Toast in a cast-iron pan until browned:

Soak the tortillas in water to soften and then wring them out.  These will eventually be used to thicken the sauce. 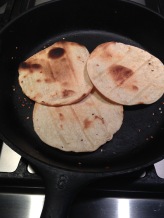 In a large pot on the stovetop heat 2 tbsp of oil.  Add the blended mixture to the oil and sauté. Add 2 cups of the remaining chicken broth to the pot, and continue to stir the sauce until the it starts to thicken.

Serve with corn tortillas and rice.