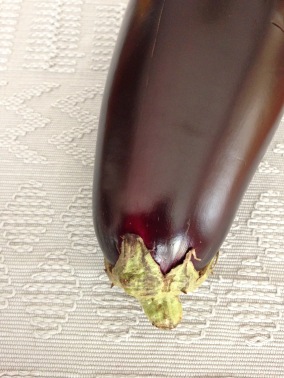 Eggplants are a hard vegetable to like – not particularly due to it’s taste, which is fairly mild, but due to it’s texture when cooked.  Leaving the skin on helps the eggplant retain it’s form while cooking, but the skin can turn out tough if not treated properly, and cooking eggplant without its skin leaves you with varying levels of slimy, mush.  Personally, I have found that grilling the entire eggplant, skin and all, until the flesh obtains an almost buttery consistency is the best way to go.  It’s easy, and also adds a delicate smokiness to the overall flavor.

There was a small Italian restaurant in Santa Cruz, Bolivia that served the best marinated eggplant.  Seeing as I was a 7-10 year old at the time, with no true appreciation for vegetables, the fact that this marinated eggplant has made itself a permanent spot in my food memory is a monumental effigy to the epicness of this eggplant dish.  While I have not been able to fully recreate it, the recipe below is a step in the right direction.