From what I have been able to gather, English muffins are actually, very much an American phenomena, and the English part of the equation seems to be a vague illusion to the English crumpet?  As someone who’s never tried a crumpet, I can’t extrapolate on their varying similarities and differences to an English muffin, but I do think that you would be hard pressed to find an American that hasn’t ever had the pleasure of eating an English muffin.  Homemade English muffins are a little bit harder to come by, but well worth the effort.  I think, their unusual cooking method and the whole process of yeast leavening scares people off.  The unusualness of the process scared me off at first too, but I’m glad that I took that initial plunge and put my faith behind the unusual recipe.

Who would have thought that cooking bread on the stove-top, like a pancake, was a thing?  I shouldn’t be surprised, people have been baking bread for centuries, and it was only a couple hundred years ago that baking powder and baking soda gained popularity as leavening agents.  Still, I had my doubts.  The primary one being – how can I guarantee that it’s cooked all the way though?  Well, some how, it just is, and some how, it works – it’s just one of the tantalizing wonders of the English muffin.

It’s been awhile since I’ve posted a bread recipe, not that I’ve stopped making bread, but until recently I haven’t had enough time to do my bread recipes justice.  I got my wild yeast starter up and running a couple of months ago, just in time for my winter bread baking, and I’ve really been perfecting it these past few weeks while I’ve been stuck at home.  It’s a good thing too, seeing as my local grocery stores have been cleaned out of commercial yeast for weeks now.  They were also cleared out of flour until recently.  I’ve been having to adapt some of my favorite bread recipes to accommodate these crazy shortages, and some of them have actually turned out pretty well, such as the recipe below.

The second ingredient that I had to sub-out was the bread flour, which I couldn’t find in stores due to shortages.  What I did find, was an box of vital wheat gluten lurking in the back of my baking cupboard.  I added a little bit of that to my all-purpose flour to compensate for my lack of bread flour.  Generally, I wouldn’t have to worry about the gluten content of my flour when making English muffins, but as I chose to use my wild yeast starter, I needed to up my gluten in order to compensate for the longer rise times, and ensure that my muffins held their shape.  So if you are going to go with the dry active yeast variant, detailed above, go ahead and use regular flour.

Recipe makes about a dozen 3″ muffins. 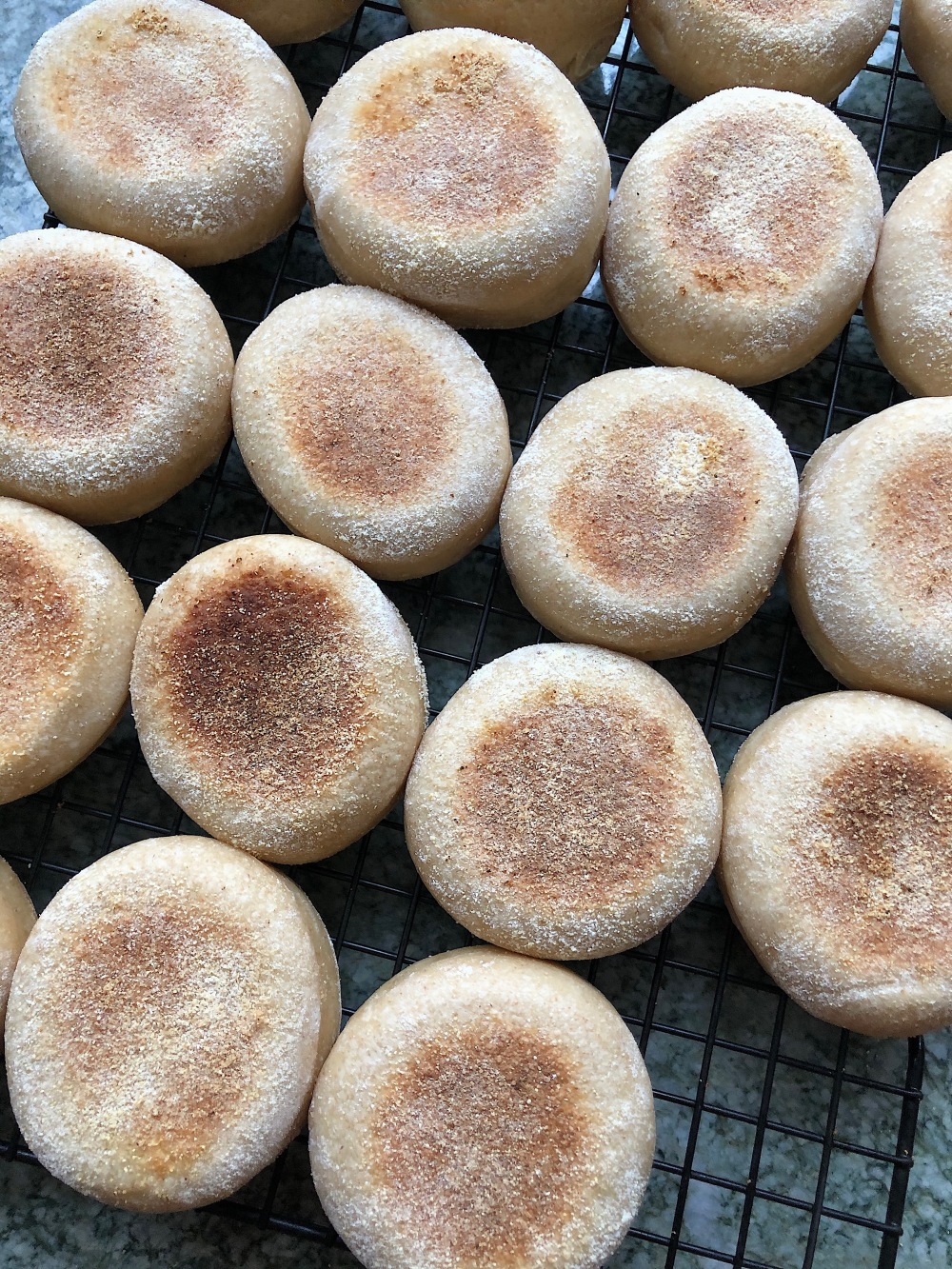